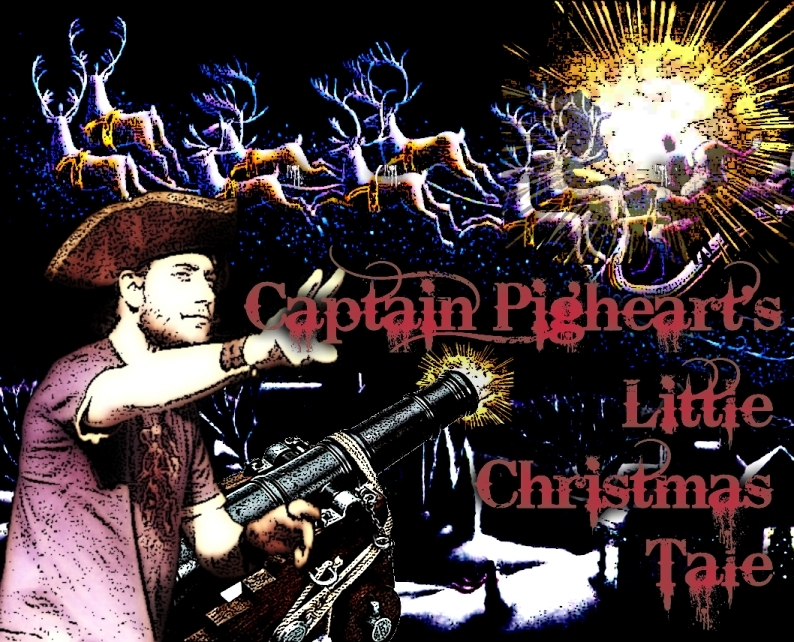 Gaaargh, ’twere the night afore Christmas an’ all were all peaceful, quieter than ye mouse. O’ course ye’ve not seen the size o’ the mice on the Lollipop, gaargh, they be dwarfin’ ye cat. ‘Tis no wonder we eats ’em, else they’d be the death of us. Mind ye, what with their remarkable plague-bearin’ skills ye might consider it a kind o’ cannibalin’ on Monty McBuboe’s part.

Aaarrr, we’d moored off the island o’ Streptococcus for the festive season. ‘Twere an odd sort o’ place, renowned for its twin industries o’ whorin’ and the soothin’ o’ sore neckholes. The lads’d disembarked almost afore we’d ceased our sailin’, so keen were they to whetten their whistlin’ gob-‘oles.

And so it were left t’ me an No Hands Mick to tie off an’ weigh anchor. To that purpose I’d ‘elped Mick strap on ‘is big wooden grippin’ mitts, the ones with the big spikes for grabbin’ fishies and ye enemy. Aaar, t’ celebrate a successul year we turned ye cannons out to sea and blasted away with good cheer. The balls parted ye Christmassy mist with a satisfyin’ bang.

The bang were follered by a wailin’ what grew louder the longer it went on, ’til finally it were punctuated by a thwack an’ the sound o’ wood an’ iron grindin’ o’er me deck. There were some splinterin’ and dust, but through it we saw a most peculiar vision. ‘Twere a heap o’ horses with sticks on their ‘eads surroundin’ a portly feller dressed in red wi’ a fine, if conspicuous furry trim. ‘E were fairly bellowin’ ‘is fury at us.

I be not a fan o’ being shouted at ‘pon me own ship, so I took the lad by the beard and bounced is noggin off the mast ’til ‘e were quietened. Mick meanwhile were inspectin’ the beasts and the cart they’d pulled. ‘E were pleased to report on the high likelihood that they’d be most tasty, prob’ly even finer than giant rat in an ‘Ollandaise sauce. This seemed to upset the tubby chap further, an’ ‘e protested most vigorously ‘gainst both our culinary devisin’s an’ our blastin’ ‘im out of ye sky. We both ‘ad a bit of a chuckle about that – ’twere a grand shot and we’d be needful o’ a trophy to brag about. And then the fat lad sat us down with a finely mulled bottle o’ wine an’ filled us wi’ Christmas cheer. ‘Twere easier then to believe ‘is ravin’ o’ sailin’ through the skies, tethered to flyin’ deer. Aaarr, there were somethin’ of a fly in ‘is ointment though (we’d treated ‘is landin’ wounds mind – this be but a metaphorical describin’ o’ ‘is woes) seein’ as the reindeer’d been slain either by the cannon blast or from the sleigh bein’ slid at some speed through ’em on becomin’ grounded.

In our newly excitable state Mick an’ me were keen t’offer our aid an’ so we set t’work a-fixin’ ye sled. Mr Christmas, for that’s who ‘e’d turned out to be, occupied ‘imself with the gatherin’ o’ the children’s gifts what’d been scattered over the Lollipop. The sleigh were lookin’ finer’n ever, freshly reloaded with presents, with it’s rider slightly bandaged. Mick’d been inspired by the reindeer problem but through ‘is alcoholic haze ‘e’d latched onto the notion that ’twere the antlers what made the beasts able to soar through ye skies. If that be so, then we needed some similarly horned creatures.

Bein’ stuck in port on Christmas Eve be not conducive to the managing o’ livestock, but thankfully on a recent treasure-hunt we’d become lost once more an’ run aground. The rocky little spot were home to a breed o’ giant tortoise what we’d found delicious and versatile. Most o’ ye time they’d spend their time weightin’ down ye ship as ballast in ye hold, but come a mite o’ hunger for a special occasion, we’d hook ’em out and roast ’em in their shells. Gaargh, it just so ‘appened that Mick’d been brewing a new batch of tar for ye hull repairs. So we sawed off ye antlers an’ glued ’em to the reptiles. That warranted a few more drinks on ‘er own, an’ we were a-giggle as we popped the horned tortoises in harness.

Mr Christmas were not so impressed, as the lumpen things simply laid on deck due to the cold and retreated into their shells. ‘Twere a great disappointment to Mick, an’ I ‘ad to stop ‘im from throwin’ ‘imself overboard. It struck me that what were needed were merely a source o’ propellin’ the beasts into the sky, once up they’d prob’ly get the hang o’ it. And so it were that we arranged the cannons on deck, an’ chained each o’ the tortoises to a cannonball. We stood back an’ lit the fuses.

The little buggers flew straight up into the night air, draggin’ the sleigh behind, an’ with a “ho ho oh God we’re going to…” the whole thing exploded high up in the sky. ‘Twere awful pretty. Presents rained down on ye chimney pots far across ye island, bringin’ joy to them as what ‘ad not expected it. ‘Course there were a fair quantity o’ body bits fallin’ too, an’ the odd tortoise, but all in all, ’twere a jolly Christmas for the locals.

It seemed Santa’d been somewhat indiscriminate in ‘is pickin’ up o’ objects left on deck, like the two barrels o’ gunpowder we’d wrapped up for Billy. Gaaargh, we’d ‘ave to go out shoppin’ now, and on Christmas Eve to boot.

Gaaargh, an’ welcome sir and madam. Cap’n Ignatius Pigheart at ye service. Perhaps I might while away this moment of tedium for ye with me

An Even Shorter Pirate Christmas Tale

Gaaargh, it was the night before Christmas and was all peaceful, quieter than a mouse… Too quiet, so we turned our cannons to the sky

Gaaargh, we’d been at sea some while and the lads were growin’ crazed as a hermit crab in an undersized shell. Sean ‘the tool’ O’Toole