Book Review: Fletcher and the Mutineers

Fletcher and the Mutineers by John Drake

Published by Endeavour Press in July 2015 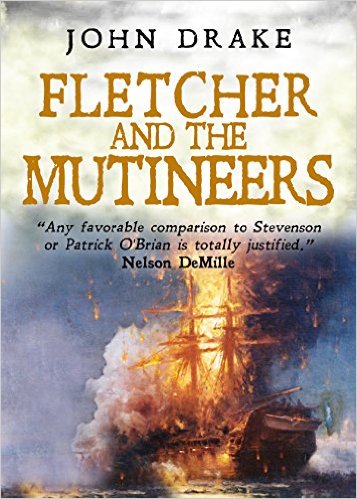 I was lucky enough to get a review copy of this for free, which naturally inclines my favour towards it…

This is the third book in John Drake’s swashbuckling adventures of Jacob Fletcher. I’ve missed the first two, but I don’t think it matters as the previous events are conveniently summarised whenever you need a reminder. They purport to fill the gaps in the historical records with Fletcher’s faithfully recorded memoirs which is always fun, happily mixing fact into fiction.

It begins with the first ever submarine strike on a vessel in 1776 which I’d never heard of and instantly grabbed my attention. The story then switches to our hulking hero Fletcher arriving in Jamaica (fleeing from his crazy and homicidal step-mother, the law and the navy) where he seeks to improve his fortune through trade and business rather than cracking skulls. He does plenty of both before his step-mother, rebellion and the navy catch up with him again.

I very much enjoyed the book, it bounds along with pace and mischief. Fletcher is an engaging rogue and most of the tale is told by him. I like his wheeling and dealing across Jamaica and his attempts to avoid being just another thug. He’s not entirely successful… he also gets mixed up in the maroon revolt and a host of dangerous characters.

It’s a slightly jarring switch to the third person accounts of his wicked stepmother, Lady Sarah. That oddness is offset by her being utterly crazy – from acquiring shaggable slaves, wrapping everyone around her finger, using her stout enforcer to remove her enemies and then pursuing Fletcher to Jamaica to destroy him.

Fletcher bounds through naval warfare, slavery, brawling, promiscuity and politics. It’s a hell of a ride, but my favourite part is the character of Lady Sarah who is truly demented and dangerous, I’m looking forwards to reading more about her.

It’s fun and worth a read: grab it at Amazon