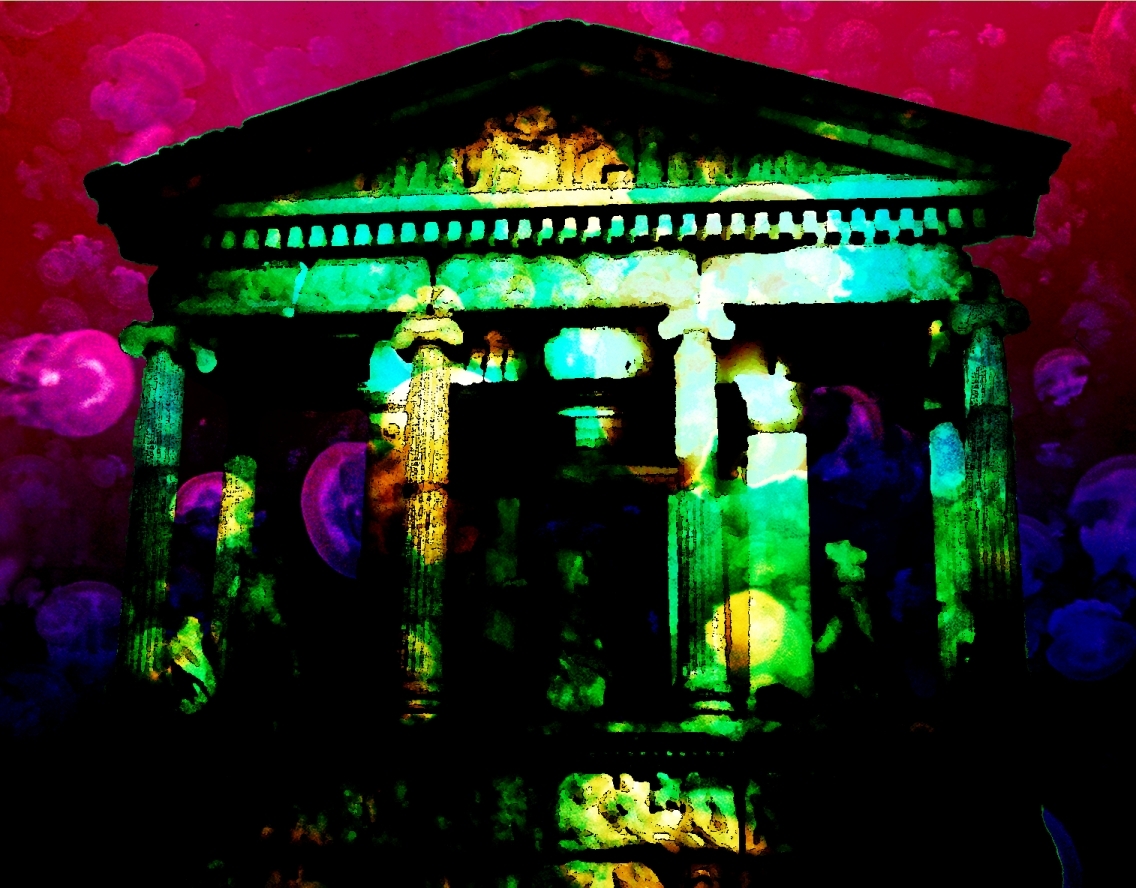 “I’ve sailed from one end of these oceans to the next and I’ve seen little of the Heavens and Earth ye finds in ye cups Horatio.” We’d been drinking since sunset by firelight. Me guest were one Horatio the Hermit who’d been so kind as to join us in the capacity of stowaway. It’d been a while since any fool had hidden aboard our ship, still less as one disguised as a rabbit hutch. Poor Barry’d been most disappointed as he knelt to stroke the bunny’s ear to find only the twisted beard of some stinking malcontent.

I’d planned to toss him overboard but the man’s silver tongue stayed his execution. Horatio babbled about a sacred cove o’ the ocean where man could commune with the watery gods and receive their blessin’. He was as mad as a flying fish, but o’ course that don’t necessarily make him wrong. We were needful o’ diversion for having plundered mightily off the Spanish coast we now neared the alcoholic doldrums o’ boredom. Our course were set, and for further amusement I ordered the hobo cleaned.

When we reached the Hermit’s temple cove we had a celebratory barrel-draining – just me, Horatio, Barry and Mick ruddy in the light and in various stages of passing out. There came startling thunder from all around us, though it were dry and the stars were clear as day, well – as they be on a clear night (ye knows what I mean). Twere strange. The sea was calm beneath us and yet when we cast lanterns over the side, the water itself was bubbling fiercely. I dashed for the helm to steer us from these queer waters – there was a slight wind I hoped to exploit. As I hobbled over, the seas exploded about us in great fountains of luminous spray, each topped by a mass of jellyfish.

I stood at the wheel, flanked by me battered buddies, gobs agog and gaping with slack-jawed surprise. A deep thrumbling from below forced the rhythmically writhing maritime beasties out of the water. Gaargh, the beauty o’nature near unmanned us, the pulse of the ocean penetrated the inebriate veil we’d drawn over our senses, flinging water over the planks. Horatio bounded over to the rail with customary grace, tripping and flinging himself over the side.

We found him treading water by the ship’s side, lit with an eerie pink from below. “Hop in lads, the water’s lovely”, the man declared. Mick and Barry were already mounting the rail when Horatio chuckled, “there’s a ticklin’ at me ankles, why ye little mischiefs”. A premonition struck me, and I laid a hand and hook upon the shoulders of me crew mates as they straddled the railing. They twisted angrily in me grip, keen to enjoy the peculiar pink waters but I held ‘em tightly.

Sure enough, me creepin’ concern were based on a solid grasp of our likely misfortune. “Why tis the ocean’s own kisses of love as in the days of ancient Greece” Horatio’s babble turned to the inevitable cries and screams as the water foamed redly about him. Barry and Mick’d returned all four o’ their feet to the deck. “Tis likely too late for a rope…” Mick commented as the hobo-hermit vanished in a whirl of bubbles and flashing teeth.

The author of the vanishing sea tramp reared suddenly from the water, borne up on another mast of brine: an horrific writhing mass of teeth and eyeballs, making me suspect the dancing sea beasts were merely escaping its dinner-time intentions. Even in our drunken state we pirates are professionals to the last and twas only a few breaking toes that slowed us in rolling a cannon across the deck. The beast was using its teeth to haul itself up the hull, its horrid eyes goggling at us with hunger, tatters of Horatio being snapped up by lower mouths as they tumbled towards the sea.

“Blast the demon back into the deeps lads,” I bellowed, quite forgetting that Mick still wore his drinking mitts and could only bash at the fuse with a mug. Meantimes the beast was on deck – with me pistol I blasted away one facet of its fishy features which merely caused it to shriek and lash out toothily at Barry who was dashing across the deck with a lantern and taper. The lantern bounced off the piscebeast and onto me waiting hook, but the taper was snapped up by the fiend as it latched onto Barry’s leg. Mick set to whacking the brute with his stein-fists while I whirled, desperate for some tinder to spark alight Mister Boom (as we’d named the cannon earlier).

There was naught to hand, and me lads were in trouble. Naught to hand, but to foot..? I smashed the lamp to the deck and thrust me peg leg into the oily flames. The rum reserve I kept within its hollow core burst into light and I put me enflamed stump to the cannon’s Boom Whisker (the naming’d gone on for a while). Mister Boom kept true to his name and atomised the ghastly sea beast, casting a fishy mist across me and me crewmates. Untethered, Mister Boom thundered back into the foremast, delivering a fatal blow to her upright fortitude.

With a weary creak the mast split and tumbled, smashing down onto the headless stub of the sea beast as it battered against the deck searching for its snappy noggin. With spars embedded in it, the whole lot slipped and tipped off the Grim Bastard, threatening to tug the ship over with it. Only the quick-thinking of me crew, alerted (finally) to the threat by the cannon’s discharge, of hacking at ropes stopped us from following the beast into the depths. The pink temple of fizzing water collapsed back into the sea and apart from the swathe of destruction across the Grim Bastard’s deck there was no sign of the wondrous events of the night. “Right,” said No Hands Mick, “that settles it – stowaways go overboard”.

Captain Pigheart All Washed Up

Gaargh, I were tossed off into the surf by me slippery serpentine steed. I took me timber to the brute, but half-hearted like, since Little

The Grim Bastard, our noble ship, seemed bound for a sad landing. We saw the murderous water from way off, but like a grotesque and

On the deck of the Good Ship Lollipop, Captain Pigheart and No Hands Mick take some air. ‘Gaargh, tis a morn’ o’ uncanny brightness Mick’