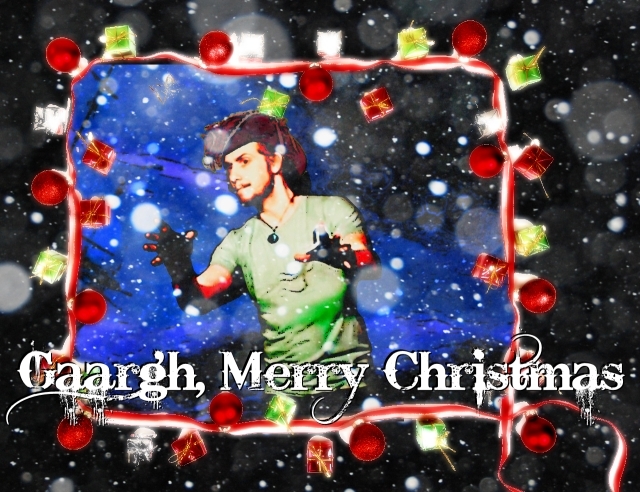 A haunting jingle hung in the frosted air – the shadow of Christmas darkenin’ ye snow. I gazed up into the sky, wonderin’ if we’d seen the last o’ the malevolent elves who had demanded the return o’ their handicraft. We’d assured ‘em that owing to Santa’s confusion twixt ‘naughty’ and ‘nautical’ we’d been off the nice list for years. I stepped to me cabin and it was Sam Knacker who took the unexpected blow to his face. Gaargh, luck had guided the tumbling box, for Sam were fractionally softer than the icy deck. It flew open on impact; a sudden fountain of unravelling ribbon whipped away by the wind. The ribbon wrapped about poor Sam’s ankle and whisked him overboard. His end was near, so try not to be too concerned.

Gingerly, I booted the frozen papier-mâché mess into me cabin. I laid it upon me desk and parted the jolly fronds with me hook. A squeak of alarm issued from both our lips, though I masked mine with a manly cough. Twas a tiny person, perhaps the height of me peg leg garnished in green felt and glitter. Twere a she (I’ve experience in such discernation) and her little pointed ears twitched nervously. I gave her me reassuring croon (like so) which soothed her. With rum and a woollen mitten to englove her she defrosted and shared her words.

High and squeaksome were her tones and I’ll not attempt ‘em here. Her name was Elf 732, and she was of the Christmas persuasion. All her life she’d laboured happily under Santa’s yoke until one fateful year he’d gone for the routine presenting and never returned. At first ye elfin folk had hope and they’d line up daily awaiting the fat fellow’s return. Days turned to weeks and the weeks greeted Mr Month in the calendrical manner. Despair, reindeer wine and violence broke out amongst the pint-sized slaves. Even Mrs Christmas succumbed to the allure o’ mulled wine and took it intravenously to depressing effect. A new leader arose from their misery, Elf 304, an embittered elf who’d resented making toys for children and yet getting none of the credit. He vowed to reclaim all o’ their elvish produce and make toys just for themselves. The North Pole was on a war footin’.

Me first thought was to sail straight for the Pole and cannonise ‘em. But me elfy pal assured me they’d be coming for her. Desperate to escape the curly-toed megalomaniac she’d hidden herself aboard one of those gift-recovery sleds that’d been annoying us. Soon enough they’d notice a missing gift box and retrace their route. They’d be coming for us.

Gaargh, battle was no stranger to me crew; we’d bedded her often. Yet we’d rarely engaged an airborne foe (unless ye count that vampire pigeon). Twas Elf 732, or “Shrimp” as I called her in me head who directed our preparations. Her toy-making ingenuity bade us strip the sails and construct a ring o’ cannons to be drawn about and up the mast at the tug o’ ropes. Lanterns bedecked the ‘Bastard like a Christmas tree, making the snow glow.

Awaitin’ combat’s a tedious affair – some o’ the lads sought amusement in rollin’ snowmen upon the gangplank. Mr Frosty took the first strike. His snowy bits exploded across the ship: they were upon us. We caught glimpses of their battle sleighs circling us, dodging through the sheets of snow. They tossed explosive crackers which blew chunks out of me ship and crew, tiny clockwork devices with revolvin’ blades fell amongst me lads and an army of red soldiers bearing torches marched into our nets and sail. The cunning mast-mounted guns spun and fired, scattering reindeer mince and flaming sleigh into the sea. Yarr, they kept coming. A sack of immaculately wrapped parcels tumbled to deck and popped open to reveal a horde of well armed elves. At first we was reluctant to stick ‘em for they were tiny. But also vicious. We had to defend ourselves with sword, pistol, plank and snowball. Gaargh, they were of a satisfying size for punting over the railing.

I’d shoulder-mounted Shrimp and we fought our way across the ship, slashing at her former comrades. Gaargh, me cutlass was an elfin shish-kebab so bloody was the fray. The cannons pounded away, until at last there was but one sleigh left and only a dozen of the green-felted monsters to slay. Victory lay spreadeagled before us. Then I felt before I saw our cannon roulette explode in a flurry o’ cast iron and fire. We were defenceless as the elf-warlord cast more unwanted gifts of incendiary at us.

We’d but one hope – I hauled meself up the foremast and held ready. As the sleigh passed beneath us I leapt, with a brave cry of terror. Yarr, I didn’t make it and I fell into the rigging once more. Shrimp did. I’d failed to discuss me plan with her and me leap catapulted her into Elf 304. The notorious warlord wore a vile sneer above his red leather and skulls. With her sword arm extended (I’d sharpened a knittin’ needle for her)  she knocked that smirk off him, and punched his tiny beating heart out of his back. Unguided, the reindeers panicked and instantly dropped from the sky. I extended me hook just in time and got a Shrimp dangling from me fake finger. Below her the sleigh smashed into the remaining war-elves and exploded in an unwarranted gout of doom.

We’d freed the North Pole, and it could return to its comfortable serfdom. Shrimp took the battle badly: she couldn’t face returnin’ North so we adopted her into the crew, for she required but a fraction of a sailor’s rum ration. I did write to Mrs Christmas to explain matters. Following tradition we posted it up the chimney, includin’ an etchin’ of Hamish McMuffin in hopes of inspirin’ chubby love again.

Twas almost Christmas Day by the time we’d cleared the deck o’ fire and snow. Tis a hungry business. With a gleam in her eye, Shrimp proposed a festive feast of reindeer and roast elf. She might be small but we felt it’d be unwise to argue, and they were delicious. Merry Christmas.

Alphabetic Dialogues 9 ~ A Stump, My Kingdom For A Stump

The Grim Bastard has suffered a fatal blow amidships. She’s like to meet Mr Jones on the ocean floor, unless the varied beasts of the

Gaaargh, ’twere the night afore Christmas an’ all were all peaceful, quieter than ye mouse. O’ course ye’ve not seen the size o’ the mice