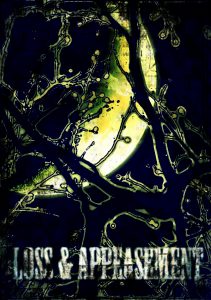 The moon glumly reflected my mood, staining the paper trees with its grudging glow. I knelt amongst the bushes, the tips of my fingers dappled with that same sallow light where they rested on the dark metal barrels waiting for their moment of revenge. Beyond our shabby nest lay the house of my enemy. The moon showed her favour, stripping away one half of her clouded veil and striking the house smartly, brightening the glassy stone and throwing the windows into gleaming eyes, piercing my night shroud with paranoid fever.

I shrank back between the leaves. It had taken me some hours to draw this close into the estate. The fearwards had been easily overwhelmed with my own hatred; I was to commit murder, what fear could oppress me now? Equally the more animal boundaries had been easy to pass. I left behind me a trail of bloodied organs and dark patches even the moon would not light. And now I waited.

The house of The Salver was visited day and night by those who respected, feared and wooed the incumbent power. His was a rare and richly powerful role, appointed by a council of government but subject to the approval of the Chall. Only a man who could be trusted to deceit and the abuse of power would survive as The Salver, official bridge between our people and the Chall, the shadowy people of the night who had haunted our dreams and lives since they first arose.

I had lost my respect for The Salver early on when our town had been offered as a gift to the Chall. My father and brother were broken, driven insane by the Chall as they invaded our streets. Living nightmares given flesh by our masters, flesh to terrify, taste and ultimately wear. The older men of our house had locked us in the cellar – myself, my two youngest cousins, sister and mother – while they pretended at a normal household, waiting for the Chall to arrive. Many had already fled and their screams had been caught on the wind, whipped and hurled back into the town by the Chall as they aproached from all directions, surrounding us with the sound of the escapees deaths.

We were separated from the Chall and the ruin they wrought upon our home by the thick wooden floor, woven with iron and jasmine. That alone hid us from them but did nothing to shield us from the sound of torture and gibbering terror that they drove our loved ones too. When the Chall had had their fill and departed The Salver was already praising our noble sacrifice and sweeping the depravities of the night into the past. Cherence was officially declared ‘out of humanity’ before we even emerged from the cellar.

We found my brother a hollow man, weeping blankly while huddling under the kitchen table. No sight or sound penetrated his mind and despite our attempts to feed him and nurse him back to health, he died; and we suffered the indignity and horror of gratitude for his death. Of my father there was worse. One of the Chall had taken his skin for clothing and left behind nothing but his eyes and a hand. The hand clenched and squeezed and for a time my mother carried it with her as a reminder of my father and the warmth of his touch. His eyes I wear about my neck in a silver necklace. I want him to see how I avenge our family.

Our home, Cherence was left as a ghost town. We five were the only survivors and we soon left as well. There was nothing in that place for us but misery and the wails of those whose minds had been cruelly bound into the bricks and wood of their homes.

No matter where we went we were poor and weak, the townsfolk welcomed us only with fear and suspicion. Our tales of Cherence were hushed down, at most spoken of only in sealed rooms as the most monstrous concession ever given to the Chall. Publically The Salver was acclaimed for his success. The Chall were so satisfied with their ghost town that they had even withdrawn from the Eastern border of our lands. We were told our sacrifice was heroic and noble. I withheld the sight of my father’s eyes from those who thought his death good. We marched on in silence, the anger and sorrow crunched down in our breasts to a hard core of loathing, we showed only our darkened eyes to the next town and made no mention of our past.

We adopted normal life again, in time, but I never forgot my hatred for The Salver. I was right to keep it, as we discovered. Eight summers and winters had passed us by. We had grown relatively contented in our new life, far from the borders and the threat of the Chall. Although our mother had faded out of life not long after we had settled, never able to reconcile herself to the loss of our lives in Cherence, I and my sister had made a home for ourselves and our cousins. We soon learned that safety and comfort were things never to be granted to those who survived the Chall.

I travelled to trade in the objects that our experiences with the Chall had given me the art to craft. I sold and taught disfigurements and wards that would resist the Chall’s senses to the travellers and wardens who met in secret and discussed the Chall and our future. So I was away from home when The Salver’s men came for the rest of my family. I returned days later to find the house empty and a warrant for our detainment and transport on the kitchen table. The Chall had never forgotten about Cherence and some clerk of The Salver’s had tracked us down at last.

None of our neighbours could tell me where my family had been taken; even the wardens had no information. I set out immediately for Cherence: it was the only place I could think of. I was of course too late. All that awaited me on the outskirts of Cherence was an abandoned wagon, its horses torn to ribbons and overlaid across the hedgerows with the tattered strips of the soldiers who had guided them. The Chall had been hungry. Of my sister and cousins there was just clothing and a single polished skull with my sister’s hair carefully draped atop it. The nightmares started before I even left the wagon, shrieking down in and around me until I managed to wrestle my strongest disfigurement into place. Then I fled.

And now I wait, moonlit, for the house to fall dark and for The Salver to return to his study. There he will light a lamp and spend an hour alone before bed. That’s when I will kill him.

Goodbye Mister Bimbolino. Chapter 3: Inflate Me If You Dare

Alex was right; a pleasant novelty. Just as he’d wildly guessed, none of the previous crime scenes had any mention of gas cylinders. Not even

Waking up is the second worst part of every day. It’s beaten only by the horror of finally rising from bed. The bit in between,

The Last Train Out

The bus lurched to a halt and vomited us onto the pavement. The main plaza was a sea of heavy clothes crested with people’s downcast