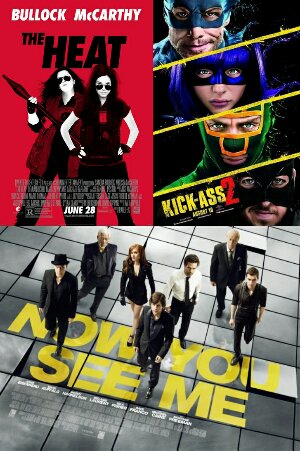 I may be bucking the trend, but I didn’t really like the first Kick Ass film. I should have loved it really – I have no problem with children swearing or the violence, but it just didn’t hit me right. I feel shame. The comic book is great though, and it may just have been the Kryptonite effect of Nicolas Cage in a bad wig. He’s not in the second one though (which brightened my attitude considerably), and goodness me the whole thing gave me such a chuckle.

In Kick Ass 2 they seamlessly merge the violent vigilante superhero action with coming of age school drama, romance, father-son moments and a weird Secret Seven vibe into a thoroughly enjoyable punch-o-rama. The cast is great (keep your eyes open for British actors) with the delightful ‘Justice League’ characters / failures who Kick Ass teams up with. For me the story is still about Hit-Girl. Chloe Grace Meretz is fantastic. She nails the school/bitchy girls storyline and delivers beautiful action scenes. Kick Ass (Aaron Taylor-Johnson) has grown up a bit (pecs to bounce cars off) but is still heroically geeky. They’re pitted against a revitalised Red Mist (or ‘The Mother-Fucker’ as he becomes known) in bondage gear and a degree in sociopathy, with his superb team of racistly-named mercs and assassins. Mother Russia is simply wonderful…

Continuous gory violent action scenes, very funny dialogue and characters with satisfying character arcs made this great for me. I know Jim Carrey (who is unrecognisable, and very good) has since complained that he hadn’t realised it would be so violent and that it’s inappropriate in the light of yet another school massacre in the States, but you’d think he would have noticed when he sics his dog on a man’s genitals and gets a sword through his body. It seems like trite backpedalling. School shootings are horrible but have become commonplace in the US – whining about violent films is pointless. This film has a strong sense of the consequences of the characters’ actions (and they are pretty bleak consequences), whereas the issue of violence in schools appears bereft of any sensible discussion of causes and consequences.

Finally, another decent buddy-cop film. It feels like it’s been a while. It’s a classic genre and should be easy to get right – Melissa McCarthy and Sandra Bullock nail it as the cops from two different sides of the street thrown together despite hating each other. Alright, so Bullock’s a feeb, but at least to me that’s just another kind of cop, one with a (possibly undeserved?) reputation for incompetence but a lesser scale of corruption than notorious villains the CIA. That’s entirely irrelevant I’m afraid, though there are of course some bad cops in here.

One version of the story is that it’s about which cop is best and what is the best way to be a cop – clearly the answers are ‘both of them’ and ‘there are many ways to be a good cop’. Hollywood can’t handle nuance so in this case one is an uptight neat-freak career-minded FBI agent who her colleagues hate (as you would any strong woman- thanks movies) despite her success record and the other a slobby scruffy violent possible menace to society feared by her colleagues and boss (as you would any strong woman- thanks again). So these two terrible women have to work together for reasons that will become apparent when you watch the film. It genuinely seems like the film is set up to make you hate at least one, preferably the ‘superior’ neat one, because that’s worse than someone being a slob. Weirdly then, you end up loving both and enjoying the film.

This is a comedy, and a funny one. McCarthy’s performances are genuine and she stands out to me from so many other Hollywood actors in how she portrays fearless and strong women. Obviously she’s too fat and unattractive to possibly head the bill but she is undoubtedly the star here. Bullock delivers her fine straight-man role and together they spark, grate and achieve the exact character arc demanded by the genre and the audience. Yay them! The comedy between the leads is deeply enjoyable, especially as they get to know each other instead of threatening and stealing from one another. It is quite violent, which has predictably upset some people (imagine policing involving any violence), but it’s well handled, well choreographed and timed for comic effect.

The supporting cast is great too – Mullins’ (McCarthy’s character) humiliated boss sets the scene very nicely, Marlon Wayans may finally have done a film he shouldn’t be slapped for, and Mullins’ ghastly car-crash family are all very good too. A lot of the family humour seems to be because they’re Irish, and I must confess myself fairly baffled by inter-American racial/national stereotypes but I think it’s because Irish-Americans stick to the poor and stupid stereotype, and they drink more than the darker-haired Italian Americans. Perplexing, but funny.

I loved it and laughed pretty much constantly, though the impressive gag rate does slow a bit when they get into the final action scenes (still satisfying though).

Now You See Me

I quite enjoyed this slick crime caper with conjurors a while ago, though thinking back I can’t actually remember much about it. Oh yeah… it’s essentially a hollow film. Films about real magicians, i.e. people who are tricking you, are problematic, especially when they make a point (over and over again) of telling you that they’re lying to you and trying to misdirect your attention. If you are paying attention, what they tell you right at the start is that what you think you’re seeing is a lie. The effect is that you immediately detach from the story and the characters, knowing that whatever they now perform is untrue and that they’ll just whoosh out an explanation at the end. Unfortunate… particularly when the end is total bollocks (no, magic is real. Oh fuck off.

Okay, now I’m irritated by it again. The performances are pretty slick, although most of the lead magic people spend the most of their screen minutes striding smugly from one side of a stage to the other while giving each other knowing winks and having CGI instead of magic tricks. The best scenes come early in the film as they’re being interviewed by the FBI and the magicians are being dicks about it. It swiftly descends into absurd chases and escalating magic show heists that it’s a struggle to care about.

Morgan Freeman is on standard form as a James Randi-style debunker of magic who we’re supplied with as a failing bit of misdirection. Nice to see him and Michael Caine together again though. Most of the cast are criminally under-used (save for the afore-mentioned smugness) despite being reliable enough actors. That said, they do come across as exactly the kind of glib egotists who make money by pretending they aren’t using a mirror (and then showing it to you) that you’d expect them to be. Maybe they do a better job than I gave them credit for.

It looks nice, but it’s disappointing that there’s so much CGI – creating the physical illusions would have been vastly more impressive, but it is somehow fitting that even the tricks are fake. And if you don’t want to punch everyone at the stupid ending there is something wrong with you.