The Desert Crystals – Part 24: The Taste of Light 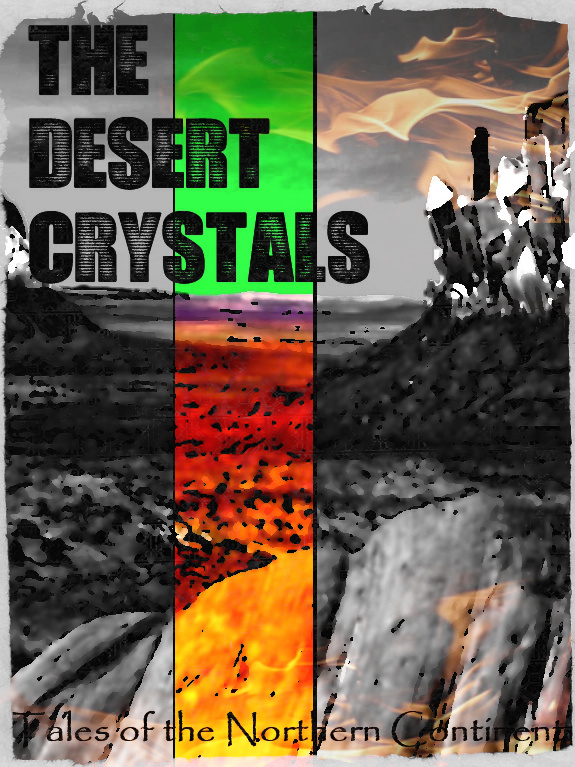 The sun had heated the breeze and sent it mischievous and daring through between branches of devil-trees and into the long helmet grasses surrounding the master airfield. It chased fakemice and thornbirds out of their roosts and perches, distressing their feathers and brush-teeth. Agitated and spoiling for a fight two fakemice espied and assailed the nest that hanged low from the peak of a stand of helmet grass. An unwise choice on their part; halfway up the stem the bottom of the nest tore open, dropping a bundle of squirming teeth and beaks onto the bolder of the fakemice, almost instantly shredding its feathery coat.

The slower, or luckier fakemouse shrieked and abandoned the venture, bounding into the deeper grass. A cautionary check behind itself for pursuit showed only the minor-gambimole’s tearing slivers off its former companion and returning to their nest. That glance was enough for the fakemouse to be snatched up by a thornbird roused by the racket and swallowed whole. The clatter of the thornbird’s teeth hid its prey’s death cries.

The breeze carried on, undeterred by the blood in its wake or the thornbird vomiting chunks of fakemouse into its kinder-pouches. The thick copses that punctured the grass slowly thinned out into garden and trimmed order. The rich scent of honey and appledarts cleansed the wind of its past. Here it plucked cheerfully at hair and leaves, playful again. Spotting an opportunity it caught at the sheaf of papers which rested precariously on the edge of a folding table, gently nudging them clockwise across its corner. The updraft gave the sheets a flutter, teasing them off the table.

Emaille lunged forwards and snatched a handful of paper from the wind’s grip. He returned them to the centre of the table, next to a sliding dune of similarly rescued papers, sketches and photographs. Casually he placed another hunk of rock on top of the additional papers, which joined the motley collection of garden stones, paperweights carved from geological oddities (notably a rare fossilised gambimole footprint) and the thumb spine of a Cactus Lion presently engaged in defending his work from the elements.

The proximity of the Cactus Lion’s spine set a fearful itch to work in his jaw. The familiar bone-deep itching irresistibly drew thumb to face. He ran it hard into the deep crenelations left there by the spines that had punched all the way through the bones of his face. Although pain had accompanied their acquisition, time had softened the memory and rounded it with thoughts that made Emaille smile wistfully as his thumb rose and fell along his jawline. The zephryous weather whisked his hair across his face, tickling and blinding. He fell back in his chair and thrust his hair back behind his head, tying it loosely with the leather thong dangling from his right wrist.

Though Emaille was supposedly working in the garden, he had in fact been deeply engaged in staring into the middle distance. Brought back to himself by the breeze he took a moment to glance over the messy rabble of paperwork weighted to the table. His article was in middle of revisions, and consequently marred by rivulets of red scribbles running between margins, up down and across the papers. Most of the handwriting was his, but a more crimson vein had been opened by his rather more critical colleague Professor Ryme, despite the latter’s reluctance to acknowledge Emaille’s field at all. He sighed; what else was there to do? Almost all of Ryme’s spidery commentary was worthless, but he would have to incorporate at least some suggestions if he was to have any hopes of committee approval.

The sheer frustration of dealing with the academic hierarchy was easily enough to drive a person quite insane; a concern that Emaille’s partner, Mehlion tended to note just before departing on another aerial voyage. Emaille sighed again and stretched backwards in his chair until it rocked onto two legs and only his bare toes kept any grip on the wiry grass beneath. He tipped back to earth, and rose to his feet with the bounce. As he returned to the world outside of his work the sounds of the grass being blown seeped back into his awareness, followed by the clatter of stoneleaf trees as the leaves vied for sunlight.

The twins were out of sight and for a moment Emaille stiffened, until a giggle preceded Chilai bursting out the purple bushes in the middle of the garden with Erlaigh tripping on her heels. Emaille allowed himself to breathe; he hadn’t been quite so inattentive as to lose track completely of the pair. He had however lost track of his article. The twins vanished into another thicket of carefully clipped plants in a blizzard of papery leaves and tiny blue flowers.

Emaille sighed again and sifted through the papers until he found what he was looking for: his letter book. Mehlion had left him a letter, as usual before departing with The Dove’s Eye and Lord Corshorn. As usual, Mehlion had hidden it in their house and it had taken three days for Emaille to find it. He was certainly glad he’d found it before either of the twins. Their letters had been slightly easier to find – Mehlion had hid one inside Erlaigh’s favourite book and Chilai’s had been between the last two slices of bread in the loaf. Emaill’s letter was taped behind the bedframe, where it would be barely visible in the mirror on the other side of their bedroom. If Emaille wore a cravat more often he might have spotted it sooner while struggling with the knot.

The least Emaille could do was to write a letter in return. It was highly unlikely any airships would be heading out in the same direction as the Traverstorm expedition, so Mehlion would have a stack of similarly well secreted missives on his return. With that thought in mind Emaille set pen to paper and smiled at the sound of their children play-fighting.

Part 7 – This Hellish Hole The night reached out and bit the airship out of the world. The moon’s radiance cut off immediately and even

This isn’t a story, it’s just a dream I had last night. My dreams are often vivid in the summer and I blame the damned