On With Flash Bricks

La la la, building building building. When I was little I almost exclusively built spaceships. Now that I’m old I just want to make buildings. I don’t know if that’s terribly depressing or not… In any case, Flash Pulp is currently meeting my brick based desires. FP003 is the first episode that introduces the end of the world, which the entire 500 or so episode podcast is running up to.

The agent of the apocalypse is Kar’Wick the Spider God. I hate spiders. One of the things I really enjoy about the Kar’Wick stories when they pop up in the feed – they’re tales of ordinary lives that are suddenly torn about by the emergence of Kar’Wick. Fun!

Read and Listen To The Story

So, as ever I’ve made something I can’t easily get in a single picture, so I made a clumsy video: 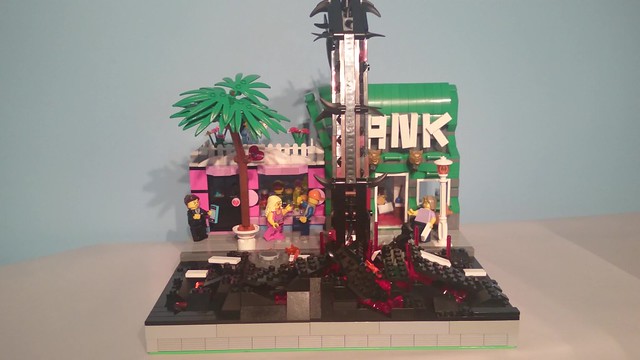 It’s a straightforward tale of a bickering couple in the middle of town whose troubles are abruptly ended by the beast. There are some specific details that dominated the design and excluded a couple of lovely features that I would have loved to include, like a sausage cart.Next time, perhaps.

The corner was a busy one, full of locals trying to get home and tourists shuffling from the historical end of the city to the shopping district. Despite the crowd, the wall of sound the couple were generating parted the flow and allowed them a pocket of empty sidewalk large enough for vigorous hand waving and finger pointing.

Sooo many details! I’d have to build the whole damn city to complete this. I choose “empty sidewalk”. That seemed a simple way to feature the squabbling pair centrally. For some reason I read the story as her punching him out.

A single hairy stalk extended from the hole, its surface a tangle of barbs, each the size of a lamp pole and ending in a spear point.

The arachnid leg stretched high, a glancing blow shattering the corner of a nearby bank branch. Reaching its apex, the towering appendage began to tumble down: inescapable doom for the lingering couple.

Kar’Wick’s legs are too vast to build in full, so this is the merest tip of the leg tearing up the tarmac and smashing the bank. 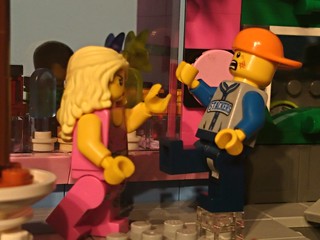 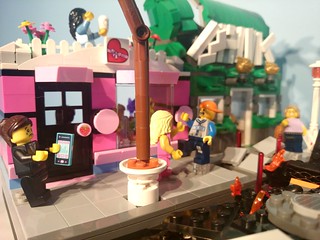 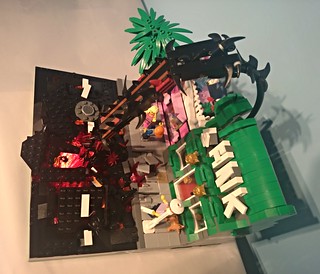 There’s so much pleasure to be had rooting through minifig parts for the perfect characters. I’ve diverged from the story’s description more than previously (I am a terrible person). They look like a downtown couple though. 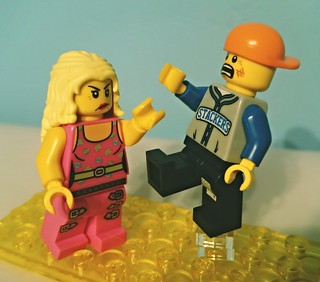 Equally important are the range of frightened, just-about-to-meet-their-end passers-by. 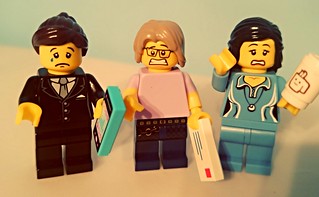 The first part that I built was the road itself. It took a while of hinging plates and clipping bits and pieces together to create a seriously smashed up road surface. It’s lovingly filled with lights and the many, many transparent red cones that I’ve hoarded at Pick A Brick.

Since I’m a terrible planner, I then had to build Kar’Wick’s leg and figure out how to connect it to the base. It’s an overly complicated assembly of Technics pins and bricks to compensate for its weight. After building the leg I’ve thought of several other ways to build one, which will definitely come in handy in a few episodes’ time. 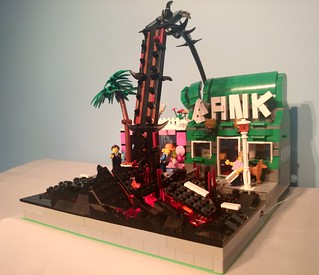 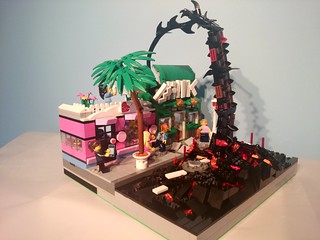 I’m really pleased with the bank. My last most favourite temple of wealth was from the amazing The Lone Ranger Colby City Showdown and I’ve retained the need for them to be lolly green. I’m getting better at lettering as well. The gold pig heads are from Guy Himber‘s awesome Kickstarter ‘Pigs vs Cows’. 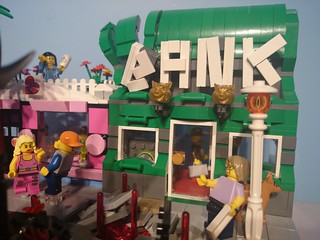 Being some kind of magical idiot I added the interior of the bank which is completely invisible. I’m quite pleased with the safe. 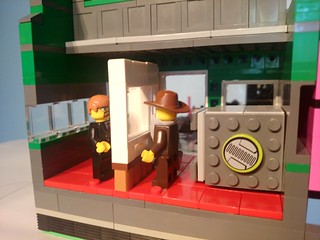 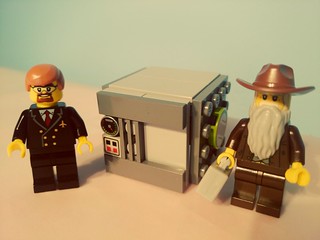 What Could Be Sweeter?

I had the lovely details of a bank being pulled apart, and from the size of the rest of the set I could fit maybe one more building in too. I’ve loved the Lego Friends colours since they started to appear, even if I abhor the deliberate and divisive gender stereotyping that Lego indulges in. A sweet shop is the only logical solution! I’m pleased that I’ve found a good use for starfish and all the food bits we’ve acquired. 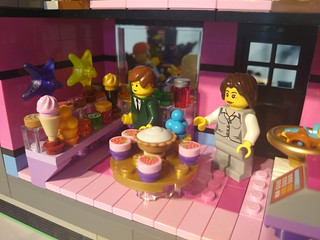 There are some more pictures of the details here, on Flickr: https://www.flickr.com/photos/eric_the_bewildered_weasel/albums/72157653904700910

You can listen to it here on Flash Pulp – Guestisode #2: Gaargh, the first snow flakes were soakin’ into the briny seas by the time

Custom Lego Awesome I got my skulls in the post a couple of weeks ago. Cruelly I’ve been too busy to take proper pleasure in

So Yeah, I’ve Been Doing This For A While My problem is planning. One of my problems is planning. I’m an improviser y’know? So I