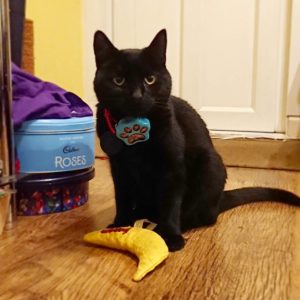 Alright, that’s a bit melodramatic… I’ve perked up considerably and the prospect of February brings me neither fear nor hope. It’s been a very quiet week, or at least… I think it has. I’ve spent much of today in a courtroom in our dress rehearsal for Light Night: The Glowstick Trials on Friday at the National Justice Museum (you should come along, especially if you have kids – get em judged by strangers!), and I feel a little perplexed about what I might actually have done this week. Let’s see… Ah, I have it. I’ve spent an inordinate amount of time doing minute photoediting at work this week, and I think it’s turned my brain inside out. Don’t get me wrong, I really love learning more about Photoshop (since I use it every day for book design and layout at Aconyte Books, and for doing a similarly wide range of graphics stuff for MissImp, I’d better learn to love it), but I’ve been kinda embedded in the same task, and can no longer perceive the colour blue. Ho hum.

I’ve foolishly ended up reading a pair of books alternately. It wasn’t intentional, but rather situational. I am very fond of my Kindle – it’s amazing to read a book with one hand while brushing my teeth or wandering around the house, so it’s an automatic go-to. On the other hand (or both hands, I guess), I love to read real books with the paper-fondling and all that. So I’ve ended up on two. I’ll not review them before finishing them (that would be daft).

First up, Adam Roberts’ Splinter, which is a curiously Jules Verney adventure about a chap whose dad predicts the end of the world, and turns out to be correct (probably), leaving he, his father and a bunch of believers (in his father) are stuck together on a little chunk of Earth. It’s odd, and I’m struggling to drag myself back it a bit. On the plus side, it’s got this gorgeous cover by Darius Hinks (whose splendid fantasy novel The Ingenious we published back at Angry Robot. He’s a very fine chap too). 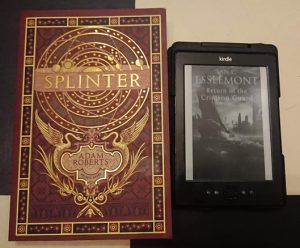 Second, I’m back in the Malazan world with Ian C Esslemont’s Return of the Crimson Guard. Kinda digging it. Also noticing more differences from Steven Erikson’s storytelling: there are far fewer “thus”es.

I’m at an awkward point in Lego building. I’ve failed to build anything for myself (as in, not as dictated by the instructions in an official Lego set) since my Wizard of Oz at the beginning of last year. That’s a combination of having very little time (mostly due to doing far too much admin for MissImp), and having relatively little space to get all the boxes out for rootling through them. I’ve managed to have a few breakdown and sorting periods which I find very relaxing, but I’ve not felt the necessary inspiration for building. Trying to build and getting nowhere is really grim. Last week I pulled a couple of boxes out and made some intricate and horrifically fragile gold gates, but didn’t know what to do with it.

But yesterday I had the day entirely to myself and after getting a few things done, I got everything out! Ah, six hours crosslegged on the floor leaves a chap utterly unable to stand, but it was totally worth it. I’ve expanded the gate, framed it and started building a structure around it. The tiled floor is very pleasing (I got loads of those quarter circle coral pink tiles from Leicester Square Lego Shop last year). The long hexagonal shape is putting enormous stress on some of the bricks, but I’m pretty chuffed with it. I suspect I’ve over-greebled the walls and will need to tone it right back down, but overally I feel deeply happy about the whole thing. It’s raised up so I can build some terrain and foliage around it when I’ve got some idea what’s going at the back. Some kind of tower…? It’s actually a little further along than these pictures show – check out Instagram for more continuous updates! 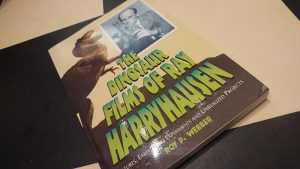 I’m rarely able to help myself when it comes to Harryhausen stuff. The man was a fantastic artist, animator and all-round nice fellow. This one’s been on my list for a while, and I’ve finally added it to the stack. Unlike the recent (fantastic) Titan tomes on the Hollywood special effects genius, this one is all black and white and a lot more text and commentary. Accordingly, it’s going to take me a lot longer to get into and through, but I’m delighted to have acquired it. 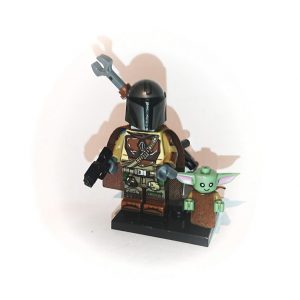 Disney’s super-secret hiding of the baby Yoda spoiler in The Mandalorian was an absolute delight but it has left us with fuck all vital Baby Yoda merchandise! The AT-ST from that brilliant shrimp-harvesting episode (I’m trying to avoid spoilers) is the only real Lego set currently available, so I was utterly at the mercy of knock-off merchants on eBay. The Mandalorian himself has a rather cack helmet print, but the body and armour printing is great, and the overall quality of the parts ain’t bad. Baby Yoda filled my heart with joy though. Shame he’s got a slight nick out of his green face paint (revealing the generic pink below). I’m quite pleased. The Mandalorian is a fantastic show, by the way, the perfect space Western that Star Wars is supposed to be and you should watch it. I’m on my third re-watch now…

Ah, this is what I’ve been doing this week… I watched both of these shows last year, but damned if I could recall a single salient story sliver. Titans season 2 popped up on Netflix, and that seemed like a fine opportunity to dive back into season 1 with Marilyn. It’s really fun! I’ve got no idea who any of the characters are (save Robin and Wonder Girl). I feel this a a DC thing – other than Batman and his usual coterie of villains, I’ve never taken to and absorbed a general sense of the DC heroes and villains. The parlous state of their movie universe pretty much guarantees my feelings will stay this way. The show picks up a very violent Robin and a couple of his street-scrapping chums to protect a young girl who appears in dire need of exorcism. They team up with a guy who turns into a green tiger and a spectacular woman who can channel the energy of the sun into burning stuff. It’s proper comics far – somewhat perplexing about why anything’s happening, but it’s all done with a pleasingly gritty tone without too much winking or spandex. The fights are pleasingly violent too – it’s no fun being twatted with a staff, and Titans does not pull those punches. The effects are a bit poor occasionally, but it doesn’t really detract much.

ST: Disco was a delight last year, and caning through it again while playing with Lego and every other activity is proving equally satisfying. I like Discovery because it’s got plenty of mental episodic drama, fun characters and splendid special effects. It’s really all I want from Star Trek. Like DS9 it’s got a strong narrative arc which pleases me, and the cast is pitch perfect (Michelle Yeoh, goddamn). As with all the prequel storylines, I end up completely forgetting that this much better looking, higher tech world with cooler uniforms is actually set way before the hilarious jumpsuits of Next Generation. Great fun, and I’m looking forward to its return with season 3.

Wedded to the Wise Okay, so I’m a couple of days behind this week. I’m placing the blame squarely on my little brother. It was

Ten Thousand Horrors So my week is delayed a few days. This is exactly how it feels – as if the days are slip-sliding over

Sad Television The main drama in my life this week has been the death of our BT Vision box. It had been titting about with