All Work and Some Play… Week ending Sunday 1 March 2020

Another week of gentle peace and busy days of WORK THINGS. Consequently I don’t have much to report, other than that my cats are beautiful and I’m generally quite content, if verging slightly on manic. To deal with that, I’ll be taking my stay calm and sleep goddammit drugs a bit earlier than usual, otherwise I’ll find myself checking work emails at midnight for that elusive “here’s the instruction you need” email. So what have we been doing? Weeeelll, I guess I’m going to have to start scribbling notes about what I’ve been doing on a daily basis, because once a thing is done, it seems to be just clean gone from my brain.

We had a couple of lovely opportunities to see friends and family this week. First, a dear pal from the States is in the UK for a week, so I ditched the improv drop-in for a wonderful evening of catch up chatter. I really enjoy those friends with whom you can slip back into whatever state you were in last time you met up. Speaking of which, Saturday saw another convergence of my siblings and spousal partners for food, drink and noise. They’re some of my best evenings, and I’m happy to find that we’re probably closer now than we ever were when we were younger. Even if I did then choose to sleep in an unfamiliar bed and deal with children early in the day – I mean, really, who gets up before midday on a Sunday?! Still, I built a small LEGO tattooist’s with my youngest niece and a cat habitat with the eldest. Win.

That all left me so thoroughly trashed that I almost had a nap on Sunday afternoon. Almost. I stirred myself into action by finishing off the (insane) LEGO Trolls: World Tour set Pop Village Celebration (41255). It’s a fun build, but seriously, what the fuck is any of this? I’m psyched that there are now felt pieces in the LEGO building kit! I’ll aim to do a proper review of this later. That woke me up enough to continue with my lovely gold and green castle/shrine thing. Not enough to give you a proper update just yet, but I’m happy with the progress. 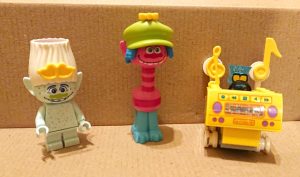 I really liked season one of DC’s Titans. It’s rare to enjoy anything with the DC label as they’re just so bad at translating their properties into live action, but it was really fun, kinda gritty with suitable TV-level special effects. But what the hell happened for round two? The first episode appears to be the last episode of the previous season, which instantly wraps up all the bad alien dimension stuff that was threatening the world. Now it’s all cool, and the team splits up. That was… odd. After that, Dick Grayson forms a new Titans team in the lush Titans tower, and we’re all confused about why this wasn’t episode one. It never really recovers from there. The introduction of Deathstroke is kind of fun, and we’re soon saturated with mini-Deathstrokes (his kids), who variously get killed or turn out to be bad guys who become good. It was intensely frustrating to see the characters from the first season tossed into thirteen episodes which have fitful pacing, no narrative arc for the existing characters, too many new characters (hi, Superboy!) the utterly baffling behaviour of evil scientists Cadmus, Dick Grayson sulking and fucking everything up, a nice turn from Bruce Wayne, and lots of random crap that makes no sense… Ah man, such a mess. It’s the worst of comic book plotting and cramming of continuities into too small a box, far too fast. Oh, and just wait for the utterly purposeless death of someone you like at the end of the season. For fuck’s sake, just make him Nightwing at the start (without a huge codpiece) and let us enjoy some superhero hijinks.

Deep Blue Sea is a proper guilty pleasure of mine. It has a very satisfying B movie cast including a shouty Samuel L Jackson, Thomas Jane, Saffron Burrows, LL Cool J (ha!), with a genuinely funny script, quite scary massive clever sharks, fun action scenes, stupid science and lots of payoffs. As someone more scared of the idea of sharks than I ought to be, I find it both appealing and terrifying. So naturally, I’ve been keen to see the sequel for some time. You’ll be shocked to hear that it’s fucking awful. Almost unwatchably bad. Everything good about the first is dunked in a bucket of chum, coming up choking, wet and reeking. The sharks are cack, the script is… not good, and almost nothing happens. Plainly filmed for a tenner, and that ten quid spent on buying the sound effects from Piranha 2. There are baby sharks that make a bizarre squealing sound and a mad scientist for whom, when he necks the precious shark cleverinating potion, we see random chemical structures and equations (a la Numb3rs) to show how clever he’s becoming. Very not good. Please compare the trailers below for further details. And do watch Deep Blue Sea – it’s great. 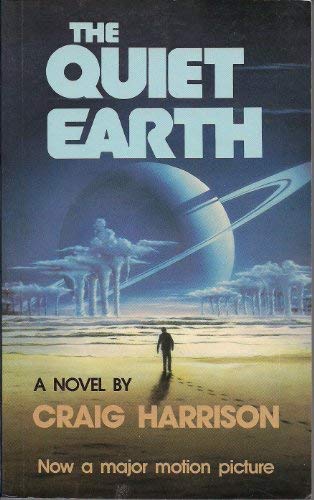 I’m somewhat relieved to discover that googling “the quiet earth book” immediately brings up “…ending explained”, as I had no idea what the hell happened. I should say that this is a long-awaited read, since I saw the film version as an impressionable teen and was suitably impressed by the post-apocalyptic (well, everyone disappears, so a really clean apocalypse) vibe, suicidal characters, but most of all by the prospect of being all alone in the world and rooting through everyone’s stuff… So I was interested in seeing how much of a gaping void there was between the book and film, and unsurprisingly, it’s pretty vast – or at least it feels like it is.

In the novel, a very sad scientist who allowed his autistic son to drown himself, and who also had a hand in the experiment that maybe caused every other living animal in the world to disappear at precisely the same time (barring himself and two others), wakes up to discover he’s alone. This leads us into a few hundred pages of his existential angst, grief about his son and collapsed family, meeting and falling out with the only survivor (a nice Maori chap who’s probably a war criminal – don’t worry, they later have a grenade-tossing shootout). We learn he sabotaged the experiment he was working on, and tried to kill himself, leading to the current world catastrophe.

It’s a lot clearer, or at least more sharply done in the film. Everyone who was alive at 6:12 died, and everyone who died at 6:12 remains alive. I think the end turns out to be just a dream, or something. If so, it’s an ending that neatly undermines the whole story. I suspect there’s good stuff in here about the psychology of despair and sadness, but I bounced off the vibe and what felt extremely muddled and hard to understand toward the end, and had to force myself through it. I kinda don’t want to watch the film again, in case it’s not what I recall…

The Week Past So, it turns out that going out for 4 of the five working nights of the first week back at work after