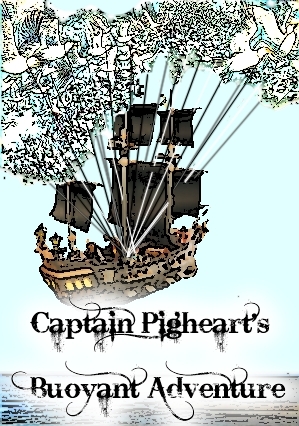 Yarr, it were a beautiful day and the sun were beating down upon the Grim Bastard and her crew of stalwart bastards like a sea otter opening a crab. The seagulls were screeching their scavengin’ lullabies. Ye may think ‘em coarse and tuneless but in comparison with the whingeing of me crew tis an operatic bliss.

The current complaint was a distant relation to a possible navigational error, which might, if pushin’ came to shovin’ came to a runnin’ through, be laid at me foot. So far I’d managed to divert blame to me helmsman , Abraham Lambkin on account of his being a cloth-eared fool (this is no general term of abuse; the poor lad had suffered terribly in a crow’s cage and covered his aural shame with a pair of fetchin’ lambs tails. Now this sound-proofing plus his habit of rocking back and forth in therapeutic motion makes it difficult to be sure ye directions’ve pierced his skull).

Anyways, due to me misplaced faith in our lug-free helmsman we’d been reefed for some days. In the initial surprise and annoyance I’d loudly declared me displeasure and hurled the youth overboard, his lambs’ tails flapping in the breeze. Ahar, the lad’d landed on ye sandbanks and continued his protestations from below. Lambkin proved surprisingly deft at avoiding me pistol shots. Gaargh, I was gratified when Mick doused him with chum from the fishing barrel. That brightened the mood and we all watched the seagulls divebomb the lad and peck him with vigour.

Gaargh, despite our mirth, it were somewhat chilling to see him tossed about. No doubt it reminded the boy of his earlier ear trauma, for he curled up and sobbed as the seabirds flung him fro and to. The lad’s plight stirred me imagination, for if a pair o’ gulls could lift an urchin off his feet (these were the mighty gulls ye may have heard of), then twere a near certitude that many hundreds of ‘em could raise the Grim Bastard…

And so we dragged Abraham back on board and dunked him in the chum bucket. This time we lassoed the gulls when they went for him (allowing for the odd peck to keep them amiable), and tied each one to a fresh length of rope. In their fury, the birds strained to escape, pulling ye ropes taut.

In time we felt a lurch beneath our feet, and strung a few dozen more for good measure. At last we achieved the air, and the seagulls hauled us aloft. Up and up we went, till we were sailing along at perhaps a hundred feet above the waves.

And so we lie about the deck, under cover naturally, given the squawking shite-hawk horde above us. And so the complaining comes down to this – where the devil are the birdies taking us? We’d neglected to consider a means of directing the feathered fiends; perhaps it’s time to start shooting at them.

Gaargh, once more I were bound against me will. This time it were not, strictly speakin’, me own fault. Ye see I’d fallen for the

The Blissfully Brief Tale of Luckless Larry and King Clam

Me mate Luckless Larry owed his utter limblessness to levellin’ a drunken accusation o’ cuckoldery at a polar bear. Twas unwise. Nonetheless, he survived his