Space convulsed. Flames of black snaked around me as I warped in and out of existence before being squeezed out of the temporal effluvium. I stuffed the time hamster back into its velvet pouch. The poor thing was shaking and clearly needed the sunflower seeds I tapped its face with. I’d been hard at work before the peelers had disturbed the Duke and I, prompting my chrono-rodential translation into this musty hole. My escape through the rodent’s portal had been as rough as ever. My cuffs were quite disarrayed although the time hole had apparently scraped clean my jacket and taken the bloodstains from my favourite strangling gloves. I’d just have to re-sanguinate them.

With the feel of the hamster stuffing its cheeks against my liver I mustered an interest in our surroundings. The stench of failure squatted in the air like a fetid whore in the gutter. The room, dark; dimly lit by dangling brass orbs. The floor boarded and scuffed, obscured by a vulgar rug depicting nothing but the weaver’s limited imagination. The chairs had been wisely bolted to the floor (how I loathe the habit of guests rearranging furniture), the table in the centre bore manacles, straps and a curious patchwork pigmentation. Promising. I’d marbled a slab or two myself. I was reminded of the lair of the Mire people on whom I’d preyed whilst dwelling amongst the shark giraffes in the Afric valleys. Of course their torturous habits were as nothing to the agony of their conversation, which marked them as victims for any philanthropically inclined assassin.

The damp aggravated my asthma so I prepared a pipe of ‘Victor Shartbritches’ Finest Health Shag’ which happily displaced both the lung clag and my general dismay. Pipe in teeth I browsed the ground floor which had been curiously carpeted with a littering of springs, bolts and metallic detritus. The pantry was a tumble of limbs and assorted torso bits; hardly appetising. The kitchen sink was stacked with skull caps and liquefying brain matter. There were no vittles to fill my growling belly. I did find tea, which I enhanced with the phials and vials of tonics I carry constantly. I resumed my rifling revived and twitchy.

I received no gentlemanly warning before I was hurled across the drawing room to demolish a bookcase and vase with the force of my en-lobment. With a grin I drew my twin gutting blades from their ingenious homes in my sleeves. Across the room, hunched in a mockery of manhood was a fabulous fellow, who whilst largely comprising a grisly mass of ill-stitched meat owned a gleaming skull and glass piston limbs which belied his organic naissance. The thing’s arms pumped hard, winding strength for further blows. I pressed my advantage, pirouetting through the air in a whirlwind of flashing blades, gashing the concertinaed bellows in his shoulders and hip. I landed some feet away, leisurely tooting on my medicine which I retained in my toothy embrace.

The automaton cocked its clockwork head as I lectured it on the proper treatment of guests. But at length I concluded that it was either dumb or damaged, for it offered neither retort nor explanation for its behaviour. A tedious affair. I sipped my tea and regarded it over my crossed knees. The house was clearly abandoned and this tin headed ogre left as a guard dog. I took up a screwdriver and playfully tinkered at the robot’s skull. The convulsive twitching gave it the semblance of pain but it wasn’t until I’d triggered a speaker function that I was prepared to regard it useful. At first I could scarcely tease it through jabbing and soft words to sing me a nursery rhyme. In time though he mastered Baa Baa Black Sheep and we moved on to Daisy. The metallic gnarl of his voice grated against my delicate aesthetics but I persevered.

By the third day he could declaim Shakespeare; I cast him in the role of Juliet. I hauled him upstairs and balanced him across the banister while I beseeched him from below. My eyes fairly fizzled as I eagerly constructed a rude stage at the foot of the staircase and dragged out the brass orbs to be our footlights. Having need of further players I plundered the cadaver cast-offs in the cupboards, and while brewing yet more tinctured tea, copied the mechanisms that operated my Juliet with the cutlery and sinew I found strewn about the kitchen. Soon I had a fine cast with whom to enact Shakespeare’s tragic romance in full.

Despite the corpsey plenitude there was something missing. My tea-induced frenzy abated, the mists of glory de-clouding my eyes. Before me stood my animated zombie players and Juliet, all powered by the field of concocted fire I’d electrified the stage with. With a flick of my toe act one would commence, lead of course with the fabulous “Two houses” speech of which we’re all so fond. I was about to engage the whole affair when I realised that I could not watch this art alone – I was the director, twas only fitting that I have an audience fit to receive it.

The gloom was seizing me – what use these decrepit actors and my machinations if I’d no audience to gasp and lavish their praise upon me? It was then that the doorbell rang. A quandary dear sirs: when one has supplanted the perhaps proper denizen, how should one answer their bell? It tickled my conscience for all of a moment before flinging the door open, puppeting the corpse of my Benvolio (whose gaping face I fancied likely fit the bill of the bell-owner) through the gap. It seems my attempts at make-up were in vain. Perhaps I’d made him too orange (to compensate for the stage luminance), perhaps it was his skeletal throat or my rude stitching. Perhaps both, for with a gasp and eyeball stretching the poor milk wench fainted away on the step. I cast Benvolio to one side and drew her in, settling her in a chair with bonds and cushion.

Over the next three days I drank tea, ground my teeth and made adjustments to the animatronic controls of my cadaverous troupe. At regular intervals some other spectator would knock on the door with concern for the last to join my dainty auditoria. And so I achieved three ranks of restless eyewitnesses to my creative opus.

It was precisely six days since I’d emerged in this creatively fertile time when I ordered the curtains open before my wide-eyed audience. They looked thrilled, and were hungry for theatre, and a meal. The careless former owner had made no allowance for the belly needs of is guests and I’d been able only to nurture their spirits with the backstage excitement of a play in progress. There were a number I had to slap awake lest they miss the third act, but most sat rigidly to attention, the sweat of anticipation dribbling down their faces. I was proud of my puppet players, from little Benvolio to Nursie (whom I’d constructed largely with an armchair), they played their parts while I provided their voices from falsetto to tenor; except for the scenes with my beloved Juliet. The wig I’d pasted onto his shiny pate quite deceived me and I truly believed our love would last forever, despite our families’ rancour.

Alas, my spectacle was cut short by a hammering at the door. Though we tried to ignore it (my audience gamely blocking it out by the stamp of their feet) it was more than I (or any other artiste) could endure. Deeply affronted I hurled the door wide and bellowed for peace in the faces of the constables crowding the door. They fell back in surprise and I slammed the door once more. Their tiresome noise resumed at once. Is there to be no calm for a theatre director? 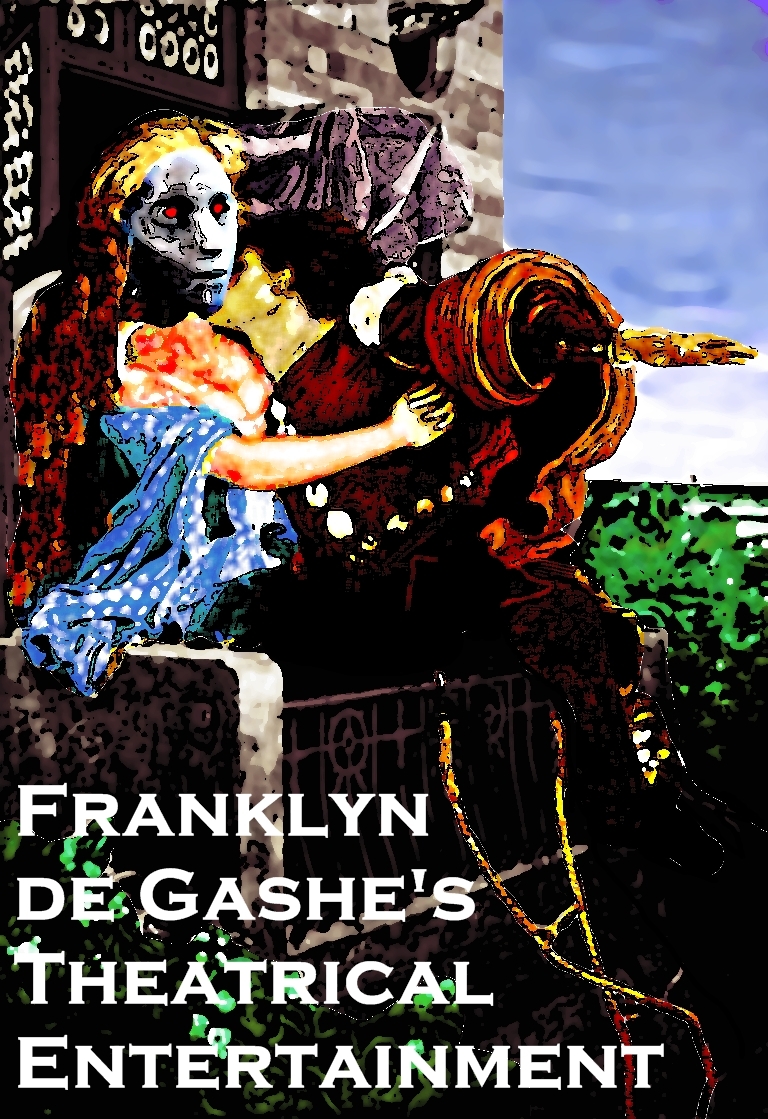 We achieved act four before they pounded the door to pieces. I’d blocked the windows thoroughly to attain the darkness and suspension of disbelief my crowd deserved. Clearly I had no choice but to turn my thespians upon the interlopers. As the animated bodies attacked I realised I should have undertaken one of the histories, perhaps Henry V. “Once more, dear friends,” I cried as the tenuously twined torsos burst upon the bobbies, “unto the breach”. The rabble had no appreciation of the work and had the temerity to adopt expressions of anger, as if their interruption were not the travesty at hand. With a sigh I set the android to ‘kill’ and withdrew my time hamster from his pouch. I tickled him in that special way and he squealed forth the temporal orifice. With luck our next stop would be a more cultural realm.

A night of nonsensical dreams and a persistent headache left me washed up lke a beached whale upon the chaise longue in my night room.

In which Franklyn unwisely leaves his laboratory unattended so he can enjoy a snifter at the club. His inhuman experiments on near-humans prove to be ill-advised and even brandy cannot resolve the ensuing fracas.

Franklyn de Gashe – a walk in the park He’s a time-travelling, serial-killing poet and gentleman. In this charming tale of elephantine-auto-mobile development he finds