All Change Please And Go Back The Way You Came

I’ve stopped taking the new stuff. Trazodone, which sounds satisfyingly like ‘taser-dome’ and conjures joyous imaginings of Mad Max III gladiators duking it out while doped up with SSRIs and Tina Turner in bondage gear just ain’t for me.

It all seemed pretty bad on Monday morning after not sleeping and enduring awesome waves of anxiety, but I was up for giving it a whirl. You never know quite how any batch of chemicals is going to slap up your noggin so you can’t make snap judgements. But it was pretty bad. It’s difficult to reflect properly on the effects a drug might be having, partly because it’s tricky to step back but also because the drug is actively having an impact on how I think and feel. Also, not sleeping is one of the most mentally debilitating things a person can experience. It has a more immediate effect than alcohol annihilating attention span, coordination, memory formation, common sense and emotional control. I needed assistance. 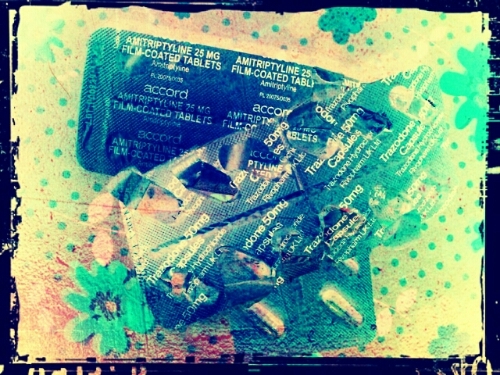 So in the evening I was talking it through with my other half (god bless her [should I believe in such a concept… I suppose I really mean to bestow, or have her self-bestow some form of benediction in an entirely secular way in recognition of my endless gratitude in a deeper way than “ta” implies]) and she suggested the wholly alien notion of reviewing the notes that came with the Trazodone. I’d skimmed ’em when I got them and did some light internet reading because I feel you should always know something about what you’re taking; really hard to do with illegal drugs so may as well take advantage of the regulated industry when you can. But I have to confess to taking the document less seriously because it was just photocopied by the pharmacist to jam into the funny little half-packet box she gave me. Presentation has an effect.

Turns out that I’d already nailed about a third of the ‘other side effects’ and 2 of the 7 ‘talk to your doctor now’ effects. Score! The dizziness (and clumsiness that results), sweating, high temperatures and nausea may not have been the mild cold I thought I had (could be plague I suppose). The weird skin sensations of shivering fingertips running up my arms might not be ghosts and the nightmares not a karmic punishment for laughing about Innerspace. The massive ramp up in anxiety was probably the lack of Amitriptyline, but is also a possible side-effect (like everything) of most anti-depressant / sedative type drugs. So that’s a whole bunch of waving flags right there. I got back in touch with the doc and canned the new stuff. I’m back on my old pal tripty and already feel much better and am sleeping fine, although I’ll have to get used to the morning fuzziness again.

Despite the side-effects I think it’s been a useful experience (and I am not a silver lining person, I tend to feel that the silver lining merely masks the awful darkness within). Having taken tripty for about two years now I’ve actually forgotten what the sensation of anxiety is like. Sure, I’ve had bad moments and days since then, but that’s had to be exceptional to punch through my tripty mask. Fuck me though, it’s awful. I’d lost the memory of what it’s like having anxiety crawling up the very marrow of my bones, spiralling and gnawing in an endless seething wave of ants. It’s paralysing, frightening and very hard to ignore – its lack of a cause (that’s stress when there’s a clear cause) makes it all harder to deal with. I’d forgotten, and for that I’m grateful, but it’s good to have been reminded. Why hadn’t I felt like that for two years? Well, that’d be the tripty. Duh.

It’s definitely worth trying something different, because who knows – it might be better. But for now, for me, the old fashioned broad-spectrum of side-effects Amitriptyline is the right choice. But, starting Trazodone helped me feel like things were different and I could change some of my habits – returning to swimming after sixteen years for example. That’ll do. Plus I’ve got a box of sedatives should I ever need to be sedated: bonus.

The Ghastly Future There’s something about the morning that just feels rich with the potential for horror. For a start I don’t like the morning.

It Cannot Be Morning Already And yet it is; the horror. I’ve been sleeping weirdly for the last month I think. It’s a combination of

What’s Wrong With This Poster? This is how the Old Angel pub in Nottingham are advertising their Valentines’ Day event: Die Die My Darling (With