I must confess this is less a review than an out and out product endorsement (befitting of my celebrity pirate role no doubt). I have worn a moustache for (I think) the last six or seven years. It didn’t come easily. I am not an hirsute gentlemna; indeed the prospect of excessive bodily hair is likely to leave me shrieking for escape. Nonetheless I do manage to tolerate my furrier friends. I first began the facial furze project at university (some fifteen years ago now). It took a while to take root, and only ever found its footing in the lower steppes of jaw and throat. Over time the hairs have extended their reach, occasionally appearing worryingly close to my eyes, and finally (at about 25 or so) edging tentatively over the hideous ravine of the filtrum. It took some coaxing, but once the moustache got going I have never since been without it. I was positively thrilled when it became clear that it would be comfortably long enough to furl, twist and curl into charming idiosyncratic whorls.

Apply Gunk To My Face

There are many, many hair products out there – aimed at both the noggin fur and that of the sub-nasal regions. For a long time I used some of the more hardcore gels and waxes for ordinary hair. The existence of gentlemanly barbering tools had passed beneath my notice. They were right under my nose the whole time… I’ve experimented with a range of excellent tasche tools- from very stiff waxes that need to be coerced into applicable putty to far drier compounds (which still do the trick), and found them all to have their place. Obviously this is going to be highly dependent on what sort of moustache hair you have, and indeed whether you possess a fine lip rug or not. In the latter case this is probably of little interest. 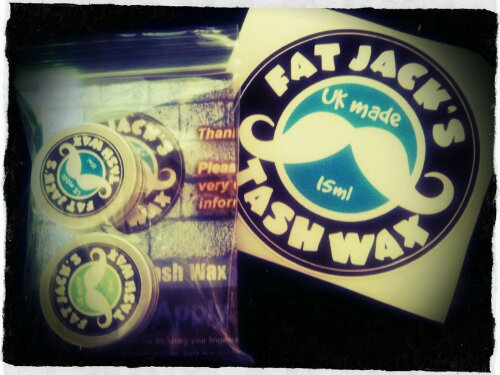 I found Fat Jack’s on eBay about two years ago and have used it pretty consistently since then. It comes in a dinky 15ml tin in either fragrance free or mint. I’ve tried both and they work exactly the same, except that the mint one does leave a pleasant scent right under your nose: ideal for plague work. The wax is like a refrigerated butter, but without the oily quality.

It mashes up very easily and the clincher for me is that it takes about 30 seconds to sort out my moustache, rather than several minutes with a harder wax. That does vary, depending on the current length of my moustaches – a full curl still takes a bit longer to ensure some evenness between them. It also holds really well – even in the appalling summer heat we’re experiencing. Rain can give it a bit of a kicking though. Since I carry the stuff always (I’m a rucksack person) that doesn’t pose a problem and it’s easily reapplied for some extra definition. I frequently do that before going on stage where the heat of the lights plus perspiration can make one’s lip branches wilt rather. This is all normal though for a wax which remains firm yet soft on the face.

Some waxes can be very rigid and even hard, which feels a bit weird – Fat Jack’s Tash Wax is perfect, ideally firm and swiftly applied. Most of the compliments I’ve received on my moustache (and this really does happen in the street, shops, pubs…) have been since using Fat Jack’s. It’s nice. This is also a well-priced moustache wax – the pack I got this week was £6.99 for two tins from eBay (free P&P). You can now buy it from their website too for slightly less. If it matters to you particularly this is a UK made and produced product.

I commend their services to you, if you have a moustache to wrangle; if you don’t possess a moustache I suggest you either grow one or groom someone else’s.

Aye, ye saw me name a-right – I’ve got me own tale slot at 12.20 but I’ll be fillin’ the gaps and dying from heat stroke for ye amusement.

The Orange Tree in Nottingham are celebrating their new rum menu with a pirate themed evening of fun and drinking:

The Orange Tree presents RUM AHOY!
Kicking off at 5pm, we have entertainment to take you swashbuckling (something pirates do) throughout the night!
LIVE MUSIC & PIRATE GAMES
RUM SAMPLING & COCKTAIL OFFERS
THE BEST DRESSED PIRATES DRINK RUM FOR FREE!
What’s even more exciting is that if you buy a Sailor Jerry, you’ll receive an awesome collectible cup and a chance to win a trip to Hawaii! Ooo aaar!
Bring ya mates & yer pieces of eight!

A marvellous notion. I’ve been invited to share some yarns with the fine folk between 5-6pm.  Following that there will be pirate music, dancing, cocktails and a best dressed pirate competition.