I’ve never entirely overcome my childhood fear and loathing of spiders. There’s just nothing I like about them and everything that I find creepy and disturbing – how they eat, move, live, reproduce. It’s all ghastly. Even the solitary vegetarian spider is no less repellent. Sure, they eat flies and stuff, but they do it in the most horrid way imaginable. It could all be done far more easily with geckos.

The bit with Shelob in The Lord of The Rings: Return of the King was easily the part I was most dreading, and I hid behind my hands for it. When they released the Lego (Shelob Attacks 9470) version I averted my eyes and shuddered away. Then they slashed it to about a tenner in Tesco on one of our late night supermarket wanderings. Then I had no choice. Even in Lego form, and even when winking, they made her really really creepy.

Now you could argue correctly that I should have dismantled her immediately and spread her parts far and wide, but I had no choice. It had to be done. It gave me nightmares. The only way I could escape that atavistic horror was by taking control – make the spider monster into whatever I want. Like a pumpkin… 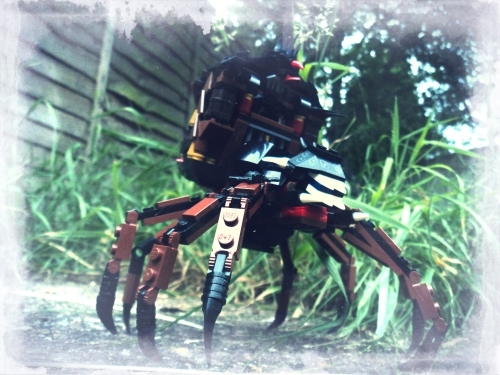 I suspect it was one of those nightmares that prompted the idea of travelling in a spider’s abdomen. It seems over-large and ideal for putting a chair inside. I made very few changes to Shelob’s front half, other than beefing up her thorax and face a bit, to try to compensate for now huge abdomen. I had to replace the back legs with rigid Technics poles to stop her from collapsing to the floor. 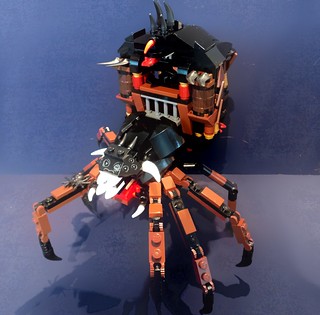 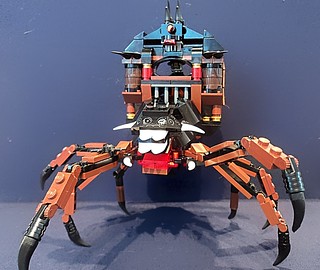 I think she came out with quite an endearing aspect in the end… it does look like a fun way to travel or go on holiday. 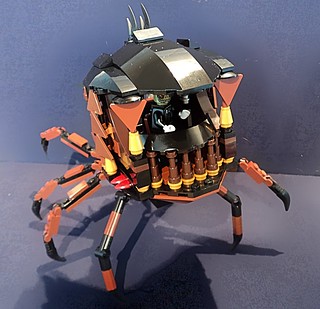 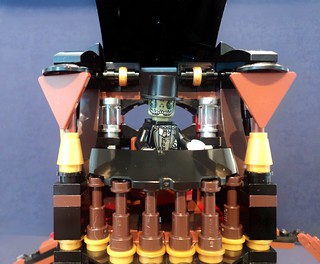